"Both Dooley and Karpen truly shine as actors...Karpen is so wonderful in her role as a neurotic millennial journalist...Moving into the final scenes, Allie and her dad share a beautiful moment in which they deliver a calf into the world together--entirely done in pantomime--which I honestly don’t think could have been performed any better."  - Ivana Vazquez, Chatham Lifestyle

"But it is the tension between Allie, ruminatively played Claire Karpen, and Ray Dooley’s rock-solid, level headed portrayal of her father, that gives this play depth." - Lauren Van Hemert, RDU On Stage

"As Allie, Claire Karpen skillfully registers the frustrations and anxieties of her New York self as well as the optimism, the disappointments, and the triumphs of her back-to-Wisconsin self...this is a show filled with laugh-out-loud comedy, delightful characterizations, touching interpersonal moments, and social statements."  - by Pamela Vesper and Kurt Benrud,  Triangle Arts and Entertainment.

"A strong cast and smart staging... thanks largely to Dooley and Karpen's strong characterizations, the relationship between father and daughter stands out as beautifully real and flawed, easily one of the most enjoyable and authentic parts of this script." - Triangle Arts Review

Ray Dooley and Claire Karpen in Dairyland.  Photo by HuthPhoto

Claire Karpen and the cast of Birthday Candles by Noah Haidle,
directed by Vivienne Benesch at Detroit Public Theater are featured
on the cover of American Theater Magazine's October 2019 edition.

The House on Cox Curve: Teaser from Eamon O'Rourke on Vimeo.

The Woodsman
written by James Ortiz
with music by Edward W. Hardy and lyrics by Jen Loring
Co-directed by Claire Karpen and James Ortiz

Movement direction by Will Gallacher
lights by Jamie Roderick and costumes by Jenny Pool
scenic and puppet design by James Ortiz
Associate director Amanda A. Lederer

"Directed by Strangemen Theatre Company's James Ortiz and Claire Karpen, THE WOODSMAN is a master work... If you have a heart, you will love this show. It's way too good to let it pass you by."
- Broadway World, THE WOODSMAN Leaves Me Speechless

"In short, the new play at the Blue Barn is everything theater can be. It doesn’t need elaborate or expensive embellishments or more than an hour and change to tell a warm, fully realized and absolutely irresistible story...The cast is an ensemble in the true sense of the word...The entire production is rustic, rough, energetic and beautiful...For its 30th birthday, the Blue Barn has given Omaha a gift from the heart."
-Omana World-Herald Review: 'The Woodsman' at the Blue Barn has a big 'Oz' heart and a Midwest soul 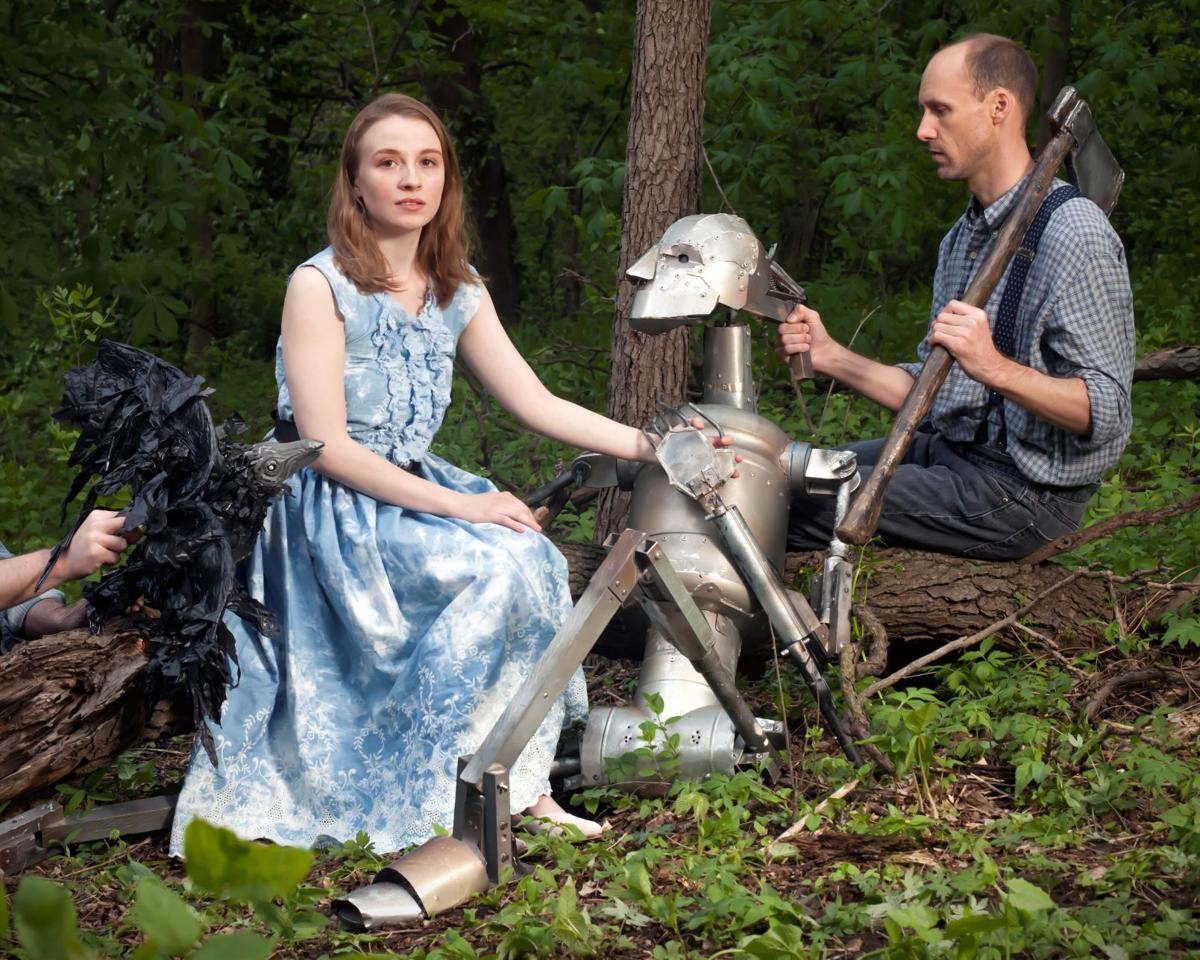 "Strangemen Theatre Company’s Bernie and Mikey’s Trip to the Moon might just end up one of your favorite pieces of theater in 2018...a total triumph: hilarious and heartbreaking at the same time, crescendoes with drama that leaves you on the edge of your seat, and filled with plenty of raw and gritty characters that you wish were your best friends.”
-YesBroadway

Nominated for a 2018 EncoreMichigan Wilde Award
for Best Performance, Actress in a Play

"...one of the most satisfying and moving new plays I have seen...The cast is uniformly good, but Karpen shines in the lead role. The actress, in her mid-30s, convincingly moves from high school to the nursing home without the aid of age-enhancing makeup."
- Detriot Free Press

"Claire Karpen as Ernestine is marvelous, filling this woman at all ages with both sweetness and strength."
- Encore Michigan

"As directed by Mimi O’Donnell, Quincy Dunn-Baker and Claire Karpen are funny, real, and devastating as a divorced couple with one last thing to share. "
- The New Yorker

New York Times: "Directed by Claire Karpen and Mr. Ortiz, this ambitious production has much to recommend it."

Huffington Post: "Excitingly, they should improve and grow by leaps and bounds as they continue to mount works. Fans of Pigpen Theatre Co. and original theater in general take note."

Timeout New York (CRITICS PICK): "Touching on mortality, futility and fate, The Woodsman is a grown-up fairy tale that proves happiness is a worthwhile goal, even if it doesn’t last ever after."

TheatreMania: "Just as no measure is left un-choreographed, no moment is left without emotional intention, creating an efficient engine that powers a robust heartbeat."

Vulture: "There's not an unconsidered moment: Every element contributes, echoes, foretells. Many a production costing 100 times as much could benefit from Strangemen's level of attention to storytelling detail."

"The grace of the staging by Ortiz and codirector Claire Karpen is aesthetically captivating while also impressively precise in its storytelling. " - Theatremania

"The real triumph is the unity of the company... The result is theater with a sense of urgency and imagination that I want to experience all the time." - Theaterpizzazz.com

"Strangemen and Co’s The Woodsman, with their deep respect for story and transcendent stagecraft, stands out as one of the most authentic presentations of Oz that I have ever seen." - New York Theatre Review

INTO THE WOODS
by Stephen Sondheim and James Lapine

"And as rendered by the Baker and his Wife (Mr. Steinfeld and Jessie Austrian), Cinderella (Claire Karpen), Little Red Riding Hood (Emily Young) and a maternally warped witch (Jennifer Mudge), these songs of reckoning come across as some of the most poignant declarations of ambivalence Mr. Sondheim ever wrote."
- Ben Brantley, New York Times (McCarter Production)

"Truly enchanting! These are the woods that you want to get lost in, a place you'll find buried treasures that you didn't even know existed."
—Ben Brantley, New York Times (Roundabout Production)

"Gorgeous. Into the Woods not only features a giant but IS ONE."
-Jesse Green, New York Magazine

"Inspired. By far the most emotionally powerful production of Into the Woods I've seen. I don't expect the theater season will offer many better experiences."
- Robert Feldberg, The Recor

INTO THE WOODS is featured in The New Yorker

"EVERYONE IS INTO THE WOODS"

"I think that our culture right now is so technological and in some ways so virtual, and our response to that is that we're really hungry for things that are tangible," Karpen continued. "There's something about the woods, and the mystery of the woods that needs to be experienced... which is why I also think people go to the theater."

SYLVIA
by A.R. Gurney
directed by Daniel Sullivan
on BROADWAY

"...strong are Ms. Lowrance and Ms. Karpen, with easy fluidity and lived-in depths percolating behind their characters’ exteriors."
- The New York Times

"If I had three or four paragraphs to spare, I’d spend them cheering for the cast."
- Wall Street Journal

"The entire cast excels... Ms. Karpen has an earthy deadpan style that well suits her character’s frequent exclamations of disgust at her employer’s behavior."
- Charles Isherwood, The New York Times